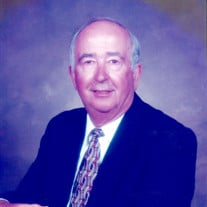 Gary Dennis, a Raymond resident, passed away peacefully on May 9, 2019. Gary was a proud father, outstanding businessman, a strong community leader and a beloved husband. Gary Dennis was previously was married to Irene Jackson and had four children; Craig, Brent, Randy, and Julie Stroh. Gary also had eight grandchildren and three great-grandchildren. Gary married Cecelia (Cec) Nissell on 6/24/1984 and was married to him through his death. Cec brought into the family her three children; Cindy Tumbarello, Kelly Anderson and Michael Nissell and had six grandchildren and they six great-grandchildren. Gary was preceded in death by his Mother and Father, Thelma (Bond) and Bruce Dennis; his sister Carol Davis (John). Gary had a passion for working in his yard. He always seemed his happiest when he was mowing his grass on his John Deere mower. No weed ever stood a chance in his yard or no leaf was ever left untouched after a fall storm. Gary sometimes poked fun at other gardeners who didn't use John Deere equipment, including his kids. He loved to hunt deer in Canada and fish in Alaska. He taught his boys how to hunt geese and ducks, which they did on the Rose Ranch for many years. He loved to travel and traveled to China, Africa, and places in between, loved to RV, and boating with his friends Sharon and Charlie Mills and Richard and JoAnne LaShance. Gary and Cec‘s greatest hobby was collecting horse drawn carriages. They started with farm implements which led them to acquire their first carriage in the l980's. Once their first carriage was bought and restored their passion only flourished. The Northwest Carriage Museum grew out of this hobby when Gary and Dec donated their carriage collection to the City of Raymond. Besides his children, Gary's proudest accomplishment was the building 0f the Northwest Carriage Museum in which he was a board member until his passing. Gary was the President of the Dennis Company for 30 years and worked for the company up until the company sold in 2018. He took over the business from his Dad, Bruce Dennis. Gary grew the retail business from just two stores to five stores and always focused on what the customer wanted and how the business could better serve the needs of the communities. Gary instilled these values of integrity and honesty upon his two sons, who later took over the business. What Gary truly should be remembered for was his love of his community and the time and commitment he put towards them. Gary volunteered for the Willapa Baseball Association for many years, mowing the fields and coaching. He was a member of the Willapa Harbor Lions and the Raymond Elks, volunteering hours for each organization, He was the Willapa Harbor Citizen of the Year and under his leadership the Dennis Company was the Business of the Year twice. Gary strongly believed in giving back to the youth in bur communities and started the Dennis Family scholarship program and helped sponsor many youth activities. He was truly loved by many and will be missed by his family and friends. A celebration of Gary Dennis’ life will be held at noon on June 1st at the Raymond Elks Lodge located at 326 3rd Street in Raymond, Washington 98577. In lieu of flowers the family requests that donations be made to the Northwest Carriage Museum at 314 Alder Street in Raymond

Gary Dennis, a Raymond resident, passed away peacefully on May 9, 2019. Gary was a proud father, outstanding businessman, a strong community leader and a beloved husband. Gary Dennis was previously was married to Irene Jackson and had four... View Obituary & Service Information

The family of Gary Bruce Dennis created this Life Tributes page to make it easy to share your memories.

Gary Dennis, a Raymond resident, passed away peacefully on May...

Send flowers to the Dennis family.