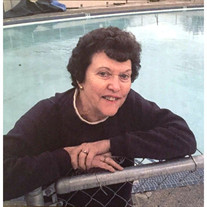 Gail Louise (Briney) Hatfield passed away, after a long battle with cancer on Sunday, December 20th, 2015 in Seattle Washington surrounded by her family. She passed in peace, knowing that she left this world a much better place than when she arrived. Gail was born December 27th, 1933 in Raymond Washington to William E. and Edith (Nevitt) Briney. Gail was proud to be a â€œNevitt Babyâ€ and her Grandfather, Dr. O.R. Nevitt, delivered her. She grew up in Raymond with her brother Nick and sisters Roberta, Wilma and Kay. They lived in a humble, but warm and loving home, provided by their father. Gailâ€™s father taught her the importance of a hard days work and she acquired her love of family and home life from her mother. Gail graduated from Raymond High School in 1951 with plans to attend Washington State College. However, fate stepped in and she married the love of her life, Stanley Hatfield, on September 2nd, 1951. She then began her professional life working for her father, a business agent for I.W.A. Local 30. Next, she started her lifelong career in the law and court system as a legal secretary for the following attorneys: Stark, Hill, Wieland, Johnson, Finlay and Monson. In 1978, she was elected to be the Pacific County Clerk, a position she held for 20 years. Gail was a woman with goals and an identity of her own. She and Stan were true equal partners in life, supporting each other in everything they did. They even shared the honor of Pacific County Democrats of the Year in 1988. She and Stan enjoyed playing card games, bowling, gardening and attending Dinner Dance and High Ball. Gail and Stan had 4 children: Kevin, Lynn, Mark and Brian. Gail loved nothing more than to have a house full of family, to celebrate the Holidays or to watch the Mariners or Seahawks play. They made their home in Raymond and were committed to the community, always making time for any cause they felt would benefit others. Gail had a true â€œshop localâ€ spirit, refusing to purchase anything out of town that could be bought locally. Anyone who knew her no doubt has memories and stories that demonstrate her spirit of generosity. She was a great cook who always happily donated her famous potato salad, with the secret ingredient of pickle juice, to any community potluck. Gail also loved to play â€œCootieâ€ with her Secret Pal Club. She was an active Mom who was involved in all of her kidsâ€™ activities from Cheerleading to leading Cub Scouts as a Den Mother for over 20 years. Education was very important to Gail; she was pleased to help send all of her children and grandchildren to college. She was a proud breast cancer survivor who, with her siblings, took part in a specialized gene study at the University of Washington with Dr. Elizabeth Swisher. They were 1 in 10 worldwide, participating in the study. Gail was active with the American Legion Auxiliary Girls State program, Pacific County Democratic Party, Ladies of the Elks (Charter Member), and Raymond United Methodist Church. She also served as President of the Washington State Association of County Clerks, South Bend Chamber of Commerce and Raymond Kiwanis Club, where she was the first female member. She was a driving force in reopening the Dr. O.R. Nevitt Memorial Swimming Pool in Raymond and organized â€œP.O.O.L,â€ or People Organized to Operate Leisure Activities. The Aberdeen Daily World recognized these efforts by awarding her Citizen of the Year in 2003. She maintained her community involvement even after Stanâ€™s stroke in 1999, shortly after she had retired. Gail lovingly cared for him at home until her own health made it necessary for him to live elsewhere. They were still able to travel to Japan, Alaska, Hawaii, the Bahamas and through the Panama Canal. Gail is survived by her husband of 64 years, Stanley, son Kevin and daughter-in-law Synde of Portland, son Mark and daughter-in-law Laurie and son Brian and daughter-in-law Jacqueline of Raymond, daughter Lynn of Olympia, 10 grandchildren, one great-grandchild, brother Nick Briney of Seattle, sister Roberta Rankin of Lacey and sister Kay Booth of Raymond, numerous nieces, nephews, cousins and in-laws too numerous to mention. She is preceded in death by her parents Bill and Edith Briney, sister Wilma Dunsmoor and daughter-in-law Freddie Hatfield. Funeral services will be held at 1:00 p.m. Monday, December 28, 2015 at the former Raymond Methodist Church. Interment services will follow at the Fern Hill Cemetery in Menlo. In lieu of flowers, donations can be made in honor of Gail Hatfield to the Wendy Feuer Fund for the Prevention and Treatment of Ovarian Cancer at UW Medicine directly at supportmedicine.org/feuer or you can mail a check made out to UW Foundation for the Wendy Feuer Fund to UW Medical Advancement at P.O. Box 358045 Seattle, WA 98195-8045. Arrangements are in care of Stollerâ€™s Mortuary in Raymond.

Gail Louise (Briney) Hatfield passed away, after a long battle with cancer on Sunday, December 20th, 2015 in Seattle Washington surrounded by her family. She passed in peace, knowing that she left this world a much better place than when she... View Obituary & Service Information

The family of Gail Hatfield created this Life Tributes page to make it easy to share your memories.

Gail Louise (Briney) Hatfield passed away, after a long battle...

Send flowers to the Hatfield family.