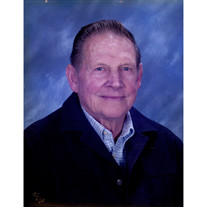 Frank Sienko passed away peacefully on March 31, 2018, at his home surrounded by family; he was 88. Frank was born April 13, 1929 in Pe Ell, WA, to Lawrence and Mary (Drevniak) Sienko. He attended Valley High School and graduated in 1947. Sports were a huge part of Franks life, and in his Senior year, he was selected for the 1947 Southwest Washington basketball All-Star team. Frank still holds the 220-yard dash record at Valley. He went on to excel in football, basketball, and track at Skagit Valley Junior College in Mount Vernon, WA. After college, Frank enlisted in the Army from 1951-1953, and was stationed in Fort Richardson, Alaska. He married Patricia Padgett in 1974. Frank worked for the Pacific County road crew for many years and retired in 1988. Frank enjoyed the outdoors and spent time fishing and working in his yard and on his tree farm. He also loved watching his many nieces and nephews competing in sporting events. Frank was a member of the St. Lawrence Catholic Church, Polish Club of Aberdeen, Elks Lodge 1292, VFW, and the American Legion. He was proceeded in death by his mother, father, and brother George. Frank is survived by his sister Irene (Inglin) and her husband Bob, brother Larry, nephew Bob Inglin Jr., nieces Connie (Inglin) Chicano, Sherry (Inglin) DiJulio, Mary (Inglin) Gibbons, Linda Inglin, Kathy (Inglin) Friese, Heidi (Inglin) Friese, Jean (Sienko) Cobbs, Karla (Sienko) Keeler, Celia Sienko, Janelle Sienko, and several great nieces and nephews. Rosary services will be held 7:00 p.m. Friday April 6th at St. Lawrence Catholic Church. Funeral Mass at 3:00 p.m. Saturday April 7th at St. Lawrence, followed by burial at Fern Hill Cemetery in Menlo where Military Honors will be accorded. A reception will be held at the St. Lawrence Parish Center. Donations may be made to St. Lawrence Catholic Church in his memory. Arrangements are in care of Stollerâ€™s Mortuary in Raymond.

Frank Sienko passed away peacefully on March 31, 2018, at his home surrounded by family; he was 88. Frank was born April 13, 1929 in Pe Ell, WA, to Lawrence and Mary (Drevniak) Sienko. He attended Valley High School and graduated in 1947. Sports... View Obituary & Service Information

The family of Frank Sienko created this Life Tributes page to make it easy to share your memories.

Send flowers to the Sienko family.