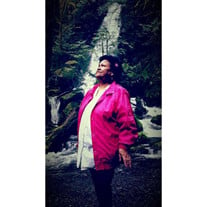 Eunice Luella â€œSisâ€ (Lorton) Williams, a Neilton, WA resident, died Monday, March 27, 2017; she was 68. Sis was born March 28, 1948 in Raymond, WA to Cleve and Cora (Gracy) Lorton. She married Alfred â€œLukeâ€ Williams in Queets, WA at the Shaker Church. He preceded her in death in 2015. Sis worked as a cook for Quinault Indian Nation and retired after 10 years. She was a basket maker, a home maker and loved helping others. She was a member of Quinault Valley Chapel in Neilton, WA. She enjoyed playing guitar, one favorite memory was of the duet she and Luke would sing. She loved her family dearly. Sis is survived by three sons, Antone W. Luscier and Harold Williams both of Queets, WA and Mathew Luscier of Aberdeen; two daughters, Julia Johnson of Queets and Christine Bryson of Neilton; three brothers Joe Lorton, Rob Lorton and Elmer (David) Lorton-Moe; three sisters Rosie Laird of Nisqually, Edith Heath and Gloria Stiegle. She is also survived by six grandchildren Mathew L. Luscier, Kristeen C. Mowitch, Sarah J. Luscier, Charles Boyer, Corine Luscier and Dakota K. Carson as well as 12 great grandchildren. She also leaves behind her pastor and friend Gary West, friends Dorthy and Judy and her friend Benny who recently preceded her in death as well as too many others to mention. Donations in her memory may be made to Christine Bryson P.O. Box 495 Amanda Park, WA 98526 to help with final expenses. Graveside services will be held at 2:00 p.m. Tuesday, April 4, 2017 at the Bay Center Cemetery. A Potluck Celebration of Life will be held immediately following at the Lorton residence in Bay Center. Arrangements are in care of Stollerâ€™s Mortuary in Raymond.

The family of Eunice Williams created this Life Tributes page to make it easy to share your memories.