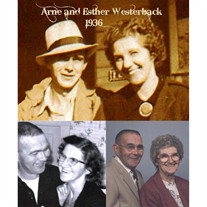 Esther Elizabeth Westerback passed peacefully on March 11, 2016 at the Willapa Harbor Care Center at the age of 99. She was born to Hugo and Elin Wilson on December 25, 1916, at the family home in Raymond, Washington. Esther graduated from Raymond High School in 1934. While working at the Riverview Hospital, Esther met her future husband, Arne, who was recovering from a car accident. Arne heard a loud banging on the wall and a piece of plaster fell. Just then, young Esther appeared in the doorway with a hammer and a sheepish smileâ€¦and the rest is history. They married October, 1938 in Eastern Washington. She is survived by her sons Ken (Rena) Westerback and Ron (Susie) Westerback of Raymond; her daughters Linda (Mike) Howell and Terri (Bill, deceased) Bradley of Fountain Hills, Arizona; and Sherri (Doug) Wiseman of Olympia, Washington. Her loving husband, Arne Johannes Westerback, passed away in 2000. Estherâ€™s brother, Walfred Wilson, also preceded her in death. Her sister, Elsie (Herb) Asplund lives in Raymond. Ten grandchildren: Scott, Jodi, Shannon, Stacy, Roni, Erin, Jon, Jeff, Holly, and Chad fondly remember Estherâ€™s talent in making fruit leather, Swedish pancakes, milk rice, cinnamon rolls, bread, and root beer. Eighteen great-grandchildren, two great-great-grandchildren, and numerous nieces and nephews were also cherished by Esther. Esther was an involved member of Our Saviorâ€™s Lutheran Church, Ladiesâ€™ Aid, Bible groups, Quilting, Boy Scouts den mother, and pinochle club. She and Arne had a friendly competition between their individual vegetable gardens each year. Penny Wise, a local thrift shop, benefited from Estherâ€™s volunteer services for many years. Esther was always up for travel, whether by camper, car, or jet. The large and festive family dinners were usually followed by many Scrabble games and laughter. Esther loved and lived her life to the fullest. There will be a Celebration of Life this spring. Reunited - What God has joined together, no man can separate. Your love will live on.

Esther Elizabeth Westerback passed peacefully on March 11, 2016 at the Willapa Harbor Care Center at the age of 99. She was born to Hugo and Elin Wilson on December 25, 1916, at the family home in Raymond, Washington. Esther graduated from... View Obituary & Service Information

The family of Esther Westerback created this Life Tributes page to make it easy to share your memories.

Send flowers to the Westerback family.