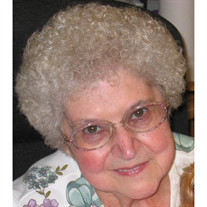 Elsie Sophia Asplund, age 87, passed away on Wednesday, April 20, 2016 at the Willapa Harbor Care Center with her loving husband and daughters by her side. She was born to Hugo and Elin Wilson at the family home in Raymond, WA on January 24, 1929. Elsie graduated from Raymond High School in 1946. She worked at Raymond High School after graduating and then at Safeway. One day while walking across the bridge over the Willapa River, the brother of one of her classmates stopped and asked if she would like a ride. He was driving a 1950 Pontiac Catalina Hardtop, one of the first ones made. Elsie was very impressed by her future husband Herbâ€™s car and accepted a ride. The rest is history and they were married on July 13, 1951 at her familyâ€™s farm. Elsie left her job at Safeway and stayed home to raise her children. She loved cooking, gardening, clam digging, playing cards, reading the newspapers and spending time with her family. Sunday was always the day for a pot roast dinner which everyone in the family looked forward to. Swedish pancakes were her specialty and were enjoyed by her children and grandchildren. As a family, they would take camping trips yearly and made trips to Disneyland as well. She was a member of the ILWU Local 1 Womenâ€™s Auxiliary. In later years Elsie enjoyed traveling to Reno, NV with her husband, Herb, and sometimes their daughters as well. The two of them also enjoyed going to movies together over the years. They drove twice a week to Olympia to shop and always had their Saturday breakfast at the Red Wind Casino. Once in a while they would drive to Hammond, OR to their favorite place for fish and chips and enjoy the scenery while there. She was loved and will be missed by her husband of 64 years, Lennart (Herb) Asplund, her daughters Carol Asplund Kennedy (Mike), Vicki Vetter, Karen Strom (Rick), grandchildren Alison, Keri, Kelli, Taylor, Tanner and 6 great-grandchildren, numerous nieces and nephews and their dog, Bentley. She was preceded in death by her sister, Esther Westerback and her brother, Walfred Wilson. Her sweet smile and kind heart will be missed by all that knew her. Her family will have a Celebration of Life this summer. Cremation arrangements were in care of Stollerâ€™s Mortuary in Raymond.

Elsie Sophia Asplund, age 87, passed away on Wednesday, April 20, 2016 at the Willapa Harbor Care Center with her loving husband and daughters by her side. She was born to Hugo and Elin Wilson at the family home in Raymond, WA on January 24,... View Obituary & Service Information

The family of Elsie Asplund created this Life Tributes page to make it easy to share your memories.

Send flowers to the Asplund family.