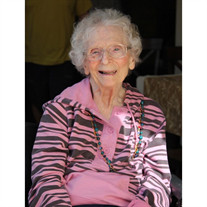 Ellen Pehl Hess, age 97, died on Tuesday, October 18th 2016 at Marquis Care Home in Newberg, Oregon. She was born on January 20th 1919 in Menlo, Washington to Henry Samuel Pehl and Pauline Mittelsbach Pehl. Ellen was the ninth of twelve children to grow up on the family farm, graduating from Willapa Valley High School in 1937. Ellen married Everett Hess on January 23, 1943 in Tacoma, Washington. He preceded her in death November 2006. She loved gardening and cooking; she knit beautiful blankets and sweaters and loved spending time with her family, especially shopping with her granddaughters. Her favorite saying was â€œget to work.â€ Ellen was a member of the Presbyterian Church. Ellen is survived by her brother John Pehl and his wife Betty Jo of Raymond, Washington; her daughter Rebecca Beasley and her husband David of Newberg, Oregon; her son Terry Hess and his wife Shannon of Pendleton, Oregon; seven grandchildren, Lisa Huber and husband Martin, Julie Motschenbacher and husband Tony, Ryan Beasley and wife Amber, Eric Beasley and wife Kareena, Tamara Wedin and husband Kevin, Bree Kogan and husband Trason, Tyler Baker and wife Heidi. She has 20 great grandchildren whom she adored and many nieces and nephews. Ellen was preceded in death by her sisters, Pauline, Ann, Julia, Emma, Lena and Elizabeth; her brothers Henry, Julius, George and Herman. Funeral services will be held at 11:30 AM Saturday, October 29, 2016 at Stollerâ€™s Mortuary in Raymond with Dr. James Hazlett officiating. A luncheon will be held at The Barge Restaurant in Raymond. Burial was held Friday, October 28th at Fern Hill Cemetery in Menlo, Washington. Arrangements are in care of Stollerâ€™s Mortuary in Raymond, Washington.

The family of Ellen Hess created this Life Tributes page to make it easy to share your memories.

Send flowers to the Hess family.