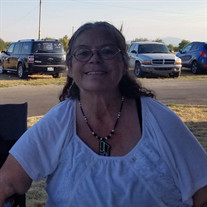 E. Darlene Heath, age 58, passed away on February 21, 2019 in her home in Usk, WA. She was born to Steve and Cora (Gracy) Lorton in Raymond WA on May 29, 1960 she was the youngest of eight. Her parents passed when she was just nine years old and her eldest sister raised her, she gained five additional brothers whom she loved deeply. She married Lonnie A. Heath on September 8, 1990. Throughout her life she was always a bright light showering those she loved with kindness, generosity and a deep sense of empathy. She dedicated her life to her family raising three girls and going on to help raise her grandchildren. She appreciated all the small blessings in her life, was a devout Christian and very proud of her deep Native American roots. Her favorite actives included working in her garden surrounded by her beloved pets singing along to her radio, family camping trips, fishing for trout with her husband, playing bingo with her sisters and was always on the hunt for a yard sale. Never one to complain and always a listening ear she was loved by everyone she touched. She is survived by her husband, Lonnie and her three daughters Crystal Robinson, Christina Ziesmer and Sarah Nenema, her ten grandchildren Jeremiah Ziesmer, Josh Robinson, Caleb Ziesmer, Whitney Williams, Maria Williams Bailey Brown, Cora Brown, Deven Nenema, Deshawn Nenema, Shayna Nenema, her great granddaughter ElliAnna Ziesmer, her two sisters Rosie Laird and Gloria Stigall as well as her four brothers Teddy Abbott, Richard Abbott, Leonard Abbott and Joe Abbott. She is preceded in death by her parents, four brothers Rob Lorton, Joe Lorton, Elmer Lorton and Steve Abbott, her two sisters Beulah Abbott and Eunice Williams and her granddaughter Jaela Nenema. Services will be held at Bay Center Pioneer Cemetery in Bay Center, WA on February 28, 2019 at 11:00 am followed by a gathering at the Lorton House. Additionally, a celebration of life will be held on Saturday, March 2, 2019 at 3:00 p.m. at the Tribal Community Building in Usk, WA.

E. Darlene Heath, age 58, passed away on February 21, 2019 in her home in Usk, WA. She was born to Steve and Cora (Gracy) Lorton in Raymond WA on May 29, 1960 she was the youngest of eight. Her parents passed when she was just nine years old... View Obituary & Service Information

The family of Edith Darlene Heath created this Life Tributes page to make it easy to share your memories.

Send flowers to the Heath family.