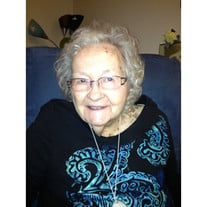 I am writing this with much sadness for our family, but not for our BEAUTIFUL Mother, Mom, Momma, Granny, Grandma, Great Grandma Nichols, and Great Granny! Momma found out that she had cancer on Monday and the Heavenly Father took her home the following Friday, December 12th, 2014. Although Momma was so sick she lead all of us children on her beautiful journey! On the last day when she was still talking she said she saw her Mommy and Poppy, and Poppy knew who she was! He had suffered from Alzheimer\\'s so she was so excited to know that he knew who she was! She saw our brother Johnny who passed away in 1972, she was going to rock Lottie her baby granddaughter that never was born. She was telling us that 2 small children had her by the hand, and at one point she said there was a 14 year old boy that took her by the hand leading the way! She saw Jesus with his open arms, and the Heavenly Table that was ready for her coming. About an hour before her passing, our cousins and some close friends came in and filled the room. We opened up the Hymnal song books and started to sing the songs of Heaven. Momma actually got a smile on her face and loving it! Momma took her last breath when we were just ending the song, \\\Softly and Tenderly\\\"! That was so perfect, because Jesus was calling! Momma always said that she wishes when she passed that someone would mention that her greatest accomplishment was being a Mother, and Grandmother. Anyone who knew her could vouch for that! Our Family will miss her so, but she has taught us to live for Jesus, and do right so that we may see her again in that BEAUTIFUL HOME that our Saviour has prepared for us that we could go to if we only believe in Jesus! Momma was born on February 27th, 1927 to Samuel and Elizabeth Elkins in Clintwood, Virginia. She was proceeded in death by her parents, husband Arthur, and her son Johnny, Granddaughter Lottie, 6 brothers and 5 sisters. Also, many nieces and nephews. On June 11th, 1946 she married Arthur Nichols and they were happily married until his passing on January 21st,1991. Momma moved to Centralia in 1991 and lived there until her journey to Heaven. She is survived by Daughter Lynn and Dave Demaray of Hoquiam, Son Ron and Ann Nichols of Aberdeen, Daughter Shirley Schaan of Albuquerque, NM, Daughter Susan and Randy Romo of Chehalis, Daughter Faye and Rick Evans of Chehalis. Grandchildren, Keith, Becky, Julie, Kathy, Melody, Ronnie, Scott, Amy, Crystal and Stephanie. Great Grandchildren, Jared, Brandon, Cody, Bradley, Nicholas, Matthew, Zackary,Taylor, Trevon, Tori, Sarah, Devon, Austyn, Morgan, Nolan, Macyn, Peyton and Isabelle. Great-Great Grandchildren, Matilda, Ryan, Cole, and 1 on the way! Her Celebration of Life will be Saturday, December 20th, 2014 at 1pm at Stollerâ€™s Mortuary in Raymond Washington. Burial will be at Menlo Cemetery with a potluck luncheon following at the Crossroads Church in Raymond. Donations may be made in her memory to a charity of your choice.

I am writing this with much sadness for our family, but not for our BEAUTIFUL Mother, Mom, Momma, Granny, Grandma, Great Grandma Nichols, and Great Granny! Momma found out that she had cancer on Monday and the Heavenly Father took her home the... View Obituary & Service Information

The family of Draxie Nichols created this Life Tributes page to make it easy to share your memories.

I am writing this with much sadness for our family, but not for...

Send flowers to the Nichols family.