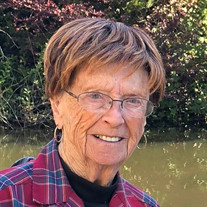 Update: Because of the current risk and travel complications caused by COVID-19, the memorial service at First Lutheran Church has been cancelled. If a service is rescheduled, the update will be posted. Native South Bend resident Dorothy May Hill passed away on February 3, 2020, at the age of 98 years young. She was surrounded by family and the compassionate staff of Willapa Harbor Care Center. Dorothy was born to Marjorie and Albert Thompson on January 14, 1922, in South Bend where she grew up with her sister and 2 brothers surrounded by many cousins, aunts, and uncles. Dorothy graduated from SBHS in 1940 and attended OSU until the war broke out. On July 6, 1944, Dorothy married Arnold Hill while he was stationed in San Diego during the war. After the war they remained in South Bend to raise their family of three children: Sherilyn, Larry, and Nancy. During their 68 years of marriage, they worked hard, traveled, and enjoyed their family and friends. Throughout her life Dorothy’s connection with her family was important to her and over time she became the matriarch and heart of her extended family. Dorothy held several jobs over the years including working for the City Treasurer, the Post Office, and as Pacific County bailiff. She enjoyed her years of membership in the JFF and Beta Sigma Phi clubs and her friendships with both old and new friends. She was a member of the First Lutheran Church and participated in Guild and their charitable activities. She was faithful in her mission to visit those who were in the nursing home, Alder House, or at home. Dorothy was an avid reader and loved her walks to the library. She worked the daily crossword puzzles and was an ace scrabble player. Her memory of people and of the history of South Bend and surrounding areas was a treasure trove for those who were fortunate to hear her stories. She is fondly remembered for her sense of humor and devotion to family and friends. Dorothy was preceded in death by her daughter Sheri, her parents, her brother Bob, her sister Connie, and her husband Arne. She is survived by her son Larry Hill and wife Cheryl and their children Kelly Lorton, Mike Lorton, Kaylee Beetchenow and husband Wayne, Kyle Hill and wife Rachel, and Andrew Hill; her daughter Nancy Hill Cunha and husband Willy and their children Linnaea and Devin Cunha; great grandchildren David Lorton and wife DJ, Ty Hill and wife Justice, Kenya, Erin, and Toby Lorton, Ryley and Michael Lorton, and Weston and Wrett Beetchenow; great-great grandchildren Raylee Lorton and Theo Hill; her brother John and wife Mimi; and numerous cousins, nieces, and nephews. The family would like to express special gratitude to Mike Rogers for his constant care and attention and Fran Karas for her visits and outings that Dorothy so enjoyed. More thanks to Grant Guyer, Jim Noren and Denny Wasberg. To all others who were helpful, we say Thanks. We are grateful for her time at Alder House. We also thank Willapa Harbor Care Center for their compassion and care of Dorothy and us during this difficult time. It takes a village to help care for our elderly and we are grateful for South Bend. Thank you. Dorothy will be remembered with love. A memorial service to celebrate the life of Dorothy will be held on April 4 at 1pm at First Lutheran Church in South Bend followed by refreshments in the social hall. Donations can be made in her name to Commemorative Giving, Seattle Children’s Hospital and Research Foundation, PO Box 5371, Seattle, WA 98145-5005.

Update: Because of the current risk and travel complications caused by COVID-19, the memorial service at First Lutheran Church has been cancelled. If a service is rescheduled, the update will be posted. Native South Bend resident Dorothy... View Obituary & Service Information

The family of Dorothy May Hill created this Life Tributes page to make it easy to share your memories.

Update: Because of the current risk and travel complications...

Send flowers to the Hill family.