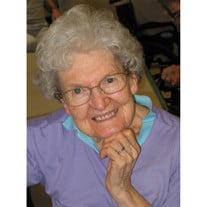 On August 7, 2016, Doris Mabel Benson left her beautiful and loving care giving family at Willapa Harbor Health and Rehab as the Kingdom of Heaven opened wide for her to join so many she had cared for throughout her life. She is now again in the arms of Gordon, her husband of 62 years. Doris was born to Mabel and David Erickson on August 18, 1923, in Little Falls, Minnesota. Raised on the Upsala family farm as a young girl, she cared for the chickens, got up at dawn to milk the cows, and, as well as the hired hands, threw the bundles of hay from the loft. For fun, she lovingly cared for and rode the work horses and her favorite quarter horse. When Doris was 14, she told her Mom that when she grew up she wanted to marry the handsome young man across the street who had helped around the farm. But in order to â€œgrow up,â€ after graduation in 1941 from Upsala High School, Doris moved to Minneapolis and obtained her certification as a hairdresser. Then the war started. At the start of World War II, like so many young women wanting to assist troops and country, Doris moved to Ogden, Utah and worked as a stenographer for the U.S. Navy and Air Force at Hill Air Force Base. Returning to her hometown in 1945, she reunited with and married Gordon, the handsome young man from across the street. Traveling across country at the end of the war, Doris and the love of her life made their home in Raymond, Washington, where she resided until this day. In 1957, while acting as Gordonâ€™s bookkeeper for his general contracting business (when Gordon was recovering from a broken pelvis sustained in one of his many adventurous jaunts climbing on the trestles above the Willapa River), Doris returned to work as a drug-store clerk and assistant pharmacist at Dunsmoor Drug Company. Many years later, the drug store was sold and Doris continued working as a bookkeeper with the Raymond Herald until her retirement in 1971. In her retirement, Doris accompanied Gordon hunting and fishing. She was a successful deer and grouse hunter, but she especially enjoyed fishing alongside Gordon in their boat where she often brought in the largest catch of the day. When not fishing, she showed her love for her family and friends with her cooking and baking, the deliciousness of which friends and family still rave about and are not able to equal. (How in the world did she cook those perfect fish and oyster dinners?) Her meticulous sewing skills were also greatly admired and appreciated, especially by her daughter who could never find anything store-made quite perfect enough. The one thing Doris did for herself? Photography. Taking still pictures and movies was the creative outlet she cherished, a love of which her children are so grateful she passed on to them. Dorisâ€™s ultimate success in life was as the greatest Mom in the world. With Gordon, she provided her children with the very best in life. As in the love she so strongly felt for her family, she gave so much to those around her, including the residents and staff at the nursing facility. The Willapa Harbor Care Center is now minus one adoring, loving caregiver. Doris is survived by her son, Gary, in Seward, Alaska, her daughter, Dione, and son-in-law, Gary Silverstein (her â€œbest friend,â€ as she often said) in Olympia, Washington, five grandchildren and eleven great-grandchildren. At Dorisâ€™s request, no formal services will be held. Condolences may be sent to her family in care of Stollerâ€™s Mortuary in Raymond. Doris is grateful to so many who were there for her in her final years, especially to the staff at the care center who so lovingly cared for her. In Dorisâ€™s memory, donations may be made to the Resident Activity Department of Willapa Harbor Health and Rehab in Raymond.

On August 7, 2016, Doris Mabel Benson left her beautiful and loving care giving family at Willapa Harbor Health and Rehab as the Kingdom of Heaven opened wide for her to join so many she had cared for throughout her life. She is now again in... View Obituary & Service Information

The family of Doris Benson created this Life Tributes page to make it easy to share your memories.

Send flowers to the Benson family.