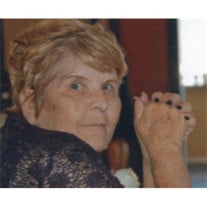 Dora Elaine Brooks Stigall passed away peacefully on Nov. 16, 2014 at her home in South Bend, WA. Elaine was born in Yuma, Arizona on Dec. 9, 1940, to William and Adeline Hicks Brooks. Elaine married Wales Stigall, and resided in South Bend for the past 54 years. She was an avid bingo player and cherished time with her family. She worked at a local cannery and restaurant, at the Willapa Harbor Hospital, and as a home care provider. She is survived by her husband and her children, Elroy (Joanne) Thompson of Tillamook, OR, Jerry Don Thompson of Vancouver, WA, Michael Stigall (Sindy Theofelis) and Gail McGovern (Mike) both of South Bend, WA, and Hank Stigall of Kennewick, WA. Also surviving her are brothers, Don Brooks of Alaska, Jerry Brooks of Tennessee, Bobby Brooks of Oregon, Allen Brooks of Kansas, and sister, Charlene Swagerty of Washington. Elaine is also survived by her nine grandchildren and four great grandchildren. She was preceded in death by her parents, a brother, Charles â€œGuyâ€ Brooks, a sister, Phyllis Dunlap, a son, Loren Thompson, a daughter, Gloria Stigall, and a grandson, Christopher Thompson. A service for Elaine will be held on Friday, Nov. 21, 2014, at 3:00 p.m. at the Grace Community Church, 609 Quincy St., South Bend, WA. A potluck reception will follow in the fellowship hall. Family and friends are invited to come celebrate her life. A private family inurnment will take place at Fern Hill Cemetery at a later date.

The family of Dora Stigall created this Life Tributes page to make it easy to share your memories.

Send flowers to the Stigall family.