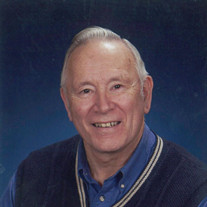 DELMOND ORVILLE BROWN May 8, 1926 – November 27, 2021 Delmond Orville Brown, 95, passed away at his home, November 27, 2021, surrounded by family. Del was born May 8, 1926, in South Bend, Washington to Zachariah and Melissa (Winters) Brown. He was the youngest of three siblings. After graduating from Raymond High School in 1944, he served in the United States Navy (1944-1946). Upon returning to Raymond, one of his best friends, Robert Hoffer, introduced him to Lois Ford. Two friends became brothers-in-law as Robert married Shirley Ford, Lois's sister. Del and Lois were married at the Immaculate Conception Church on July 8, 1950. They celebrated 71 years of married life last July. Del worked for the Postal Service for 35 years retiring in 1981. He ended his working career selling real estate for Harbor Realty as Managing Broker. Del enjoyed travel, and during their retirement Del and Lois visited Germany, The Netherlands, Ireland, England, Hawaii and numerous states with his Navy reunion group. Del was a renaissance man who loved his family, his faith, community and country. He shared his love of the outdoors with family and friends, fishing, hunting, camping, berry picking, peeling bark, and golfing. He also enjoyed going to musicals with his family and was on several bowling leagues. At age 76, he scored his very first hole-in-one on the fourth hole at the Willapa Harbor Golf Course. Born with a gift of gab, Del was known to tell a great story, loved a good joke and had an infectious laugh. He had a happy disposition, and when greeted with a “how are you”, Del would honestly reply “I am always good”. He was a member of the Raymond VFW, American Legion, Saint Lawrence Catholic Church, and the Knights of Columbus. Del was President of the Willapa Harbor Baseball Association (1973-1977). He also started the annual church turkey bingo which became a tradition for many families in the community, including his family. The bingo was later named the Del Brown Turkey Bingo. In 2014, Del, along with friends Ken Grimm and Bob Beck, were awarded by the Honor Flight Network with an all-expense paid trip to the WW11 memorial in Washington D.C. It was a proud moment in his life. Del is survived by his wife Lois, daughters Colleen Brown, Karen (Greg) Shildmyer, Denise Carl, Sheryl DeShields, son Alan (Tanya), and his grandchildren Adam (Celena) Shildmyer, Kaitlyn Carl, Derek Carl, Joey (Elva) DeShields, Dan DeShields, Rachel Brown, and Paige Brown, in addition to his sister-in-law Shirley Hoffer and numerous nieces and nephews. He is the last family member of his generation and was preceded in death by his parents, his brother Zack Brown, Jr, his sister Zeldalee Olsen, and his son-in-law Bruce Carl. Our gentle giant was a person of strength, integrity, honesty who was also a kind, simple man who will be missed by many. A service will be held at a later date. In memory of Del, the family asks that donations be made to Disabled American Veterans (DAV) Chapter 5 – 4980 Auto Center Way, Bremerton, WA 98312, St Lawrence Church - PO Box 31, Raymond, WA 98577, or Knights of Columbus - 1320 Raymond-South Bend Road, Raymond, WA 98577. Arrangements are in care of Stoller's Mortuary in Raymond.

The family of Delmond Orville Brown created this Life Tributes page to make it easy to share your memories.

Send flowers to the Brown family.