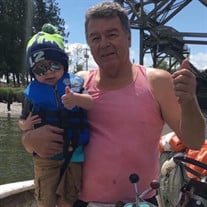 David "Bugzy" Frank (67) passed away July 8, 2021. He was the husband of Maria Frank (deceased) and they shared 26 years of marriage together. Born March 27, 1954 in South Bend, WA, David "Bugzy" Frank II was the son of David "Bug" Frank II and Ethel Marie Frank of Bay Center. Bugzy attended Bay Center School until sixth grade, then attended South Bend. He graduated from South Bend High School in 1973 where he was known for being a great football player and wrestler. He was proud of his title as second in state in wrestling his senior year. After high school, he attended Grays Harbor College. He went on to become a logger to support his growing family. Bugzy was an extremely hard worker and was known for his tough as nails strength and great work ethic. He made his first commercial tuna fishing trip on the Ethel May when he was 13 years old. He wore many hats over the course of his life, working in the woods, as a commercial razor clam digger (Alaska, Quinault beaches, Willapa spits), and worked in numerous other commercial fisheries, including gillnetting, crabbing, long-lining, etc. He was dedicated to his family, including his wife Maria, and remained by her side until the end. He also loved his children and grandchildren wholeheartedly. He was the third of five Davids in the Frank family and was proud to have passed down this generational name to his son, David Frank IV, who named his firstborn son David Frank V. His best days were those spent with family and friends. He enjoyed playing card games with his kids and grandkids and had a knack for making even the most mundane task fun. He also loved camping, boating, water skiing, scuba diving, hunting, and much much more. Bugzy was well-known for his infamous "Hey, hey, hey!" which he would blast out of the PA system(s) he had installed on every vehicle he owned. He was a proud, active member of the Chinook and Quinault tribes. He would always share an abundant amount of seafood (freshly cooked and/or smoked) with his elders, family, and friends. This was a tradition passed down to him by his father and one he passed down to his children. Bugzy is survived by his son Chris Frank, his wife Amber and their two children - Gage Frank and Jonah Frank - all of Vancouver (WA); his daughter Samantha Eller, her husband Michael and their two children - Roselyn Eller and Calvin Eller - all of Cathlamet; daughter-in-law Claire Frank and her three children - David Frank V, Grayson Frank, Ella Frank - all of Spokane; stepdaughter Amy Stigall, her husband John and their four children - KellyAnn Graves, John Stigall Jr., Katlyn Stigall, and Summer Stigall - all of South Bend; stepson Christopher "Fur" Lorton, his girlfriend Misti Kelm of Raymond. Bugzy is survived by his siblings Herb Frank, Steven Frank and Cindy Frank. Bugzy is also survived by many, many cousins, nephews, and nieces! Bugzy Frank is preceded in death by his beloved wife Maria Frank and his adored son David Frank IV. Bugzy’s son Chris Frank will be sharing the details of his celebration of life. Please reach out to him or other close relatives if you are interested in attending. Arrangements are in care of Stoller's Mortuary in Raymond, Washington. You may visitwww.StollersMortuary.com to leave condolences for the family.

The family of David W. Frank Sr created this Life Tributes page to make it easy to share your memories.

Send flowers to the Frank family.