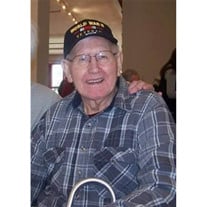 "Dale Franklin Sturgill was born October 22, 1923 in Centralia, WA, and passed away at the age of 92 on May 29, 2016 in Old Willapa at the home of Thomas and Tracy Sturgill with his family at his side. A 1941 graduate of Valley High School, he was class valedictorian. He was also an FFA State Farmer. Dale F. Sturgill entered U.S. Army service February 6, 1943. He was sent to Fort Devens, Mass., and after his basic to Camp Edwards, Mass. he became a member of the Fourth Engineer Special Brigade assigned to the 3017th Engineer Maintenance Company which was attached to and in support of the 544th Engineer Boat and Shore Regiment, \\\the Seahorse Division.\\\"" The 544th was stationed at Camp Edwards and Camp Gordon Johnston, Fla. for amphibious and ground warfare training. On October 6, 1943 he was promoted to Technician Fifth Grade. 10-Jun, 1944 he departed San Francisco for overseas duty, arriving at Oro Bay, New Guinea July 1, 1944. There he was promoted to Technician Fourth Grade. From Buna, New Guinea, they stopped at Aitape, Madang, Lae, and Wadke Island and staged for the September 15, 1944 D-Day invasion of Morotai, Dutch East Indies, then on Leyte, Philippine Islands (P.1.), Luzon (Lingayen Gulf P.I.) and Dagupan, P.I. His unit was the first American troops to arrive at Navotas, Rizal, (Manila) P.I. In July 1945 General Kreuger of the Sixth Army awarded his unit the Meritorious Service Plaque. At Aringay, P.I. the 544th staged for the assault of the home island of Japan. With acceptance of surrender terms, however, his company prepared for its new mission as the first occupational troops landing at Wakayama, Honshu, Japan. There he was promoted to Technician Third Grade. During his service, Technician Third Grade Dale F. Sturgill received the U.S. Army Sharpshooter Badges for the M-1 Rifle and M-1 Carbine, and earned the U.S. Army Good Conduct Medal, the American Theater Service Ribbon, the Asiatic Pacific Campaign Medal, the New Guinea Campaign Medal Bronze Star, the Philippine Liberation Ribbon with Bronze Star, the Luzon Campaign Bronze Star, and the World War II Victory Medal. After the war, he went to work for the Valley (later Willapa Valley) School District as bus driver, head of maintenance and transportation. He was the man who did \\\"everything\\\" that needed doing. He loved his job, especially watching the students grow up. When he retired in 1980, Dale then worked for Turner and Son as a fuel transport driver until he retired...again. He spent many years afterwards as the primary caregiver for his wife, Eileen, after she suffered a major stroke. Dale lived to help people, be they friends, community members, or family members. He never wanted payment or thanks, just to be able to give of himself. Preceding him in death were his wife Eileen Sturgill, parents Watson and Mary Sturgill of Willapa, his sister Doris Walcott, of Raymond, and his brother Floyd Sturgill of Aberdeen. Surviving him are sons: Michael D. Sturgill (wife Deana Border), of Willapa, Patrick E. Sturgill (Mary), of McCleary, and Thomas A. Sturgill (wife Tracy), also of Willapa. Grandchildren surviving Dale are: Jennifer Sturgill, Kyle Sturgill-Simon, Kari Blake, Mindee Sturgill, Joe Sturgill, Shelley Smith, Addle Shay Moa, Sarah Sturgill, Lacey Sturgill, Brad Sturgill, and Chris Sturgill. There are 9 great grandchildren as well as many nieces and nephews. Dale was a Life Member of the National Rifle Association, a member of the Raymond VFW and American Legion Posts, the Pacific County Historical Society and the Willapa Valley FFA Alumni Association. Dale loved to eat good food, and many friends and loved ones share loving fond memories of him eating his own multiple helpings as well as those of others at the table. He put every bite to good use, because he never stopped puttering, fixing, building and then supervising (lovingly, with a wicked twinkle in his eye) the work of those he loved so dearly. He was particularly fond of chocolate covered peanuts, Eileen\\'s pies, and strawberry shortcake with real whipped cream, to name but a few. He also loved to take the \\\"back roads\\\" on drives of any length. A house full of loved ones and friends were blessed to be right by his side as he embarked on his voyage Home. There will be a potluck Celebration of Life at the Willapa United Methodist Church in Willapa on June 25, 2016 at 4:00pm. In lieu of flowers, please donate to the following in Dale\\'s name: Pacific County Hospice, United Methodist Church, Willapa Valley FFA, or scholarship fund. Arrangements were in care of Stollerâ€™s Mortuary in Raymond. .

"Dale Franklin Sturgill was born October 22, 1923 in Centralia, WA, and passed away at the age of 92 on May 29, 2016 in Old Willapa at the home of Thomas and Tracy Sturgill with his family at his side. A 1941 graduate of Valley High School,... View Obituary & Service Information

The family of Dale Sturgill created this Life Tributes page to make it easy to share your memories.

Send flowers to the Sturgill family.