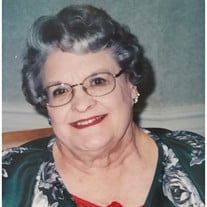 Colene K. Mason, born Feb. 22, 1935 in Skidmore, Missouri to Ray D. & Georgia Mae (Ashbrook) Hardin. She passed February 15, 2016 at the Willapa Harbor Health & Rehab Center in Raymond. Colene was born on her motherâ€™s 26th birthday by the same doctor that had delivered her mother. When she was 6 months old she and Georgia rode a train from Missouri to Washington State where Ray had gone out ahead of her and gotten a job. They settled in Camas, WA where Ray worked in the Crown Zellerbach mill and Georgia worked at the Post Record newspaper in Camas. Colene graduated from Camas High School in 1954. She went to beauty school after graduation but never actually practiced going to work in the bag factory at Crown Zellerbach instead. She and Lawrence E Mason were married in November of 1959. In 1962 they adopted a daughter, Lisa. They later divorced. Twice. In July 1972, Georgia, Ray, Colene and Lisa moved to South Bend. In the late 1970â€™s she went to work for the City of Raymond and later in the City of South Bend. She had lived in Olympia for the past many years and three months ago returned to South Bend to be with her family. Colene was very talented. She was a very accomplished seamstress; she crocheted, and did ceramics, made very elaborate candles, Christmas ornaments and many other crafts. All of these projects produced very nice professional looking items. And she was very generous about sharing the things she made with others. She was preceded in death by her parents, Aunt Dorothy Rupe and Uncle John Ashbrook. She is survived by her daughter, Lisa Olsen of South Bend. Grandchildren Megan Olsen Downard (Bob) and Norman Olsen (Alyssa) both of South Bend. Three great grandchildren Ole, Levanda and Ruby. Cousin Patti Kreps of White Salmon, WA and special friend and second mother, Eunice Johnson of Salt Lake City, UT. Memorial services will be held at the South Bend United Methodist Church in South Bend on Sunday, February 21st at 2 p.m. with fellowship following at the church. Memorials may be made to HAVA at PO Box 243, Raymond, WA or The Gray Ladies (volunteers at the Willapa Harbor Health and Rehab) c/o Ena Bale at 442 Twelfth St, Raymond, WA 98577. Cremation arrangements were in care of Stollerâ€™s Mortuary in Raymond.

The family of Colene Mason created this Life Tributes page to make it easy to share your memories.

Send flowers to the Mason family.