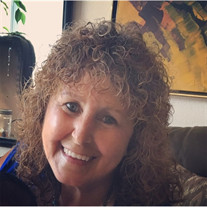 Christi Lynette Burks, 57, of Raymond, Washington passed away peacefully at her home August 16, 2017. Better known as Chrissie, she was born to Harold and Carol (Corliss) Burks on August 31, 1959 in Raymond, Washington. Chrissie is survived by her daughter Alexandria Gerow, her son-in-law Jon, and her two grandsons Jace and Mason Gerow. She is also survived by step-mother Lois Burks of Raymond, her brother Harold â€œGeneâ€ Burks (Tina) of Raymond, and her sisters Debi Manavian (George) of Phoenix, AZ, Carla Kubin (John) of Raymond, and Angi Cain (Greg) of Salmo, British Columbia. She is preceded in death by her parents Harold and Carol Burks, and her step-brother Ray Gardner. She is also preceded in death by her first love Toby Millican, who was also the father of her daughter, Alex. Growing up in Lebam, Washington, Chrissie attended Willapa Valley schools. Her senior year, she had a brief stay in Canada, but came back to graduate with the Willapa Valley class of 1977 where she was voted Most Humorous. After graduating high school, she met and fell in love with Toby Millican. They were together many years before Chrissie gave birth to the light of her life, Alex. After many years of living in Raymond, Chrissie moved to Aberdeen and obtained a job at the Westport Shipyards, where she worked for several years. It was there that she met her second love, Javier Contreras, whom she was with for fifteen years. During those years, she helped Javier in raising his six sons: Zack, Jered, Xander, Logan, Nikko, and Isaiah. She loved and cared for those boys as her own. Chrissie moved back to Raymond in the last years of her life to spend time with her family and help care for her step-mother and two grandsons. Chrissie always had a great sense of humor and enjoyed making others laugh. She was genuine and loving towards all those who knew her. Her outgoing personality drew others to her. She enjoyed camping and music. Family was the center of her life. She was especially proud of her daughter and grandsons and would brag about them to anyone who would listen. They were her pride and joy. A celebration of life is scheduled for 1:00 on August 26th at the Raymond Elks. All are welcome to attend to celebrate Chrissieâ€™s life. In lieu of flowers, your presence, love, and support is sufficient. The family would like to thank the following: The Raymond Elks, Stollerâ€™s Mortuary, Raymond Fire Department, and the community for their kind words and support. Arrangements are in care of Stollerâ€™s Mortuary in Raymond.

Christi Lynette Burks, 57, of Raymond, Washington passed away peacefully at her home August 16, 2017. Better known as Chrissie, she was born to Harold and Carol (Corliss) Burks on August 31, 1959 in Raymond, Washington. Chrissie is survived... View Obituary & Service Information

The family of Christi Burks created this Life Tributes page to make it easy to share your memories.

Send flowers to the Burks family.