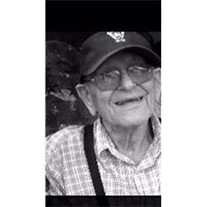 Charles was born January 27,1918 to Charles Nicholas Wilhelm and Margaret Elizabeth (Jayne) Wilhelm in Black Lake, Washington. He died Friday, October 25, 2013 at Parkside Nursing Care Center in Union Gap, WA. At the rascally age of 4, Lank moved with his parents to Raymond, Washington. He attended school at the Riverview School and graduated from Raymond High School. Lank served in the Civilian Conservation Corps based out of Sequim, Washington. On August 31, 1940, he married his sweetheart Wilma May Miller. Together they had two children, William L. Wilhelm and Edith May Wilhelm. Lank was a logger with heart and soul. He began working at the Willapa Harbour Mill, then moved on to Gyppo Logging, both out of Raymond. He then finished his logging career at Weyerhauser, where he retired after 25 years of service in December of 1980. Lank and Wilma were avid hunters, fishers and darn quick clam diggers. Lankâ€™s grandchildren spent many wonderful hours fishing with him and his friend Bud Bowlin on Budâ€™s boat out of Westport. They also spent a little time â€œfeedinâ€™ the fishesâ€ due to seasicknessâ€¦but still value the lessons that Papa taught them on the ocean. He often spoke of helping his friend Dick Hunt to build his log cabin up on the hill. That is one of the places that the grandkids and great grandkids recall as being a favorite place to visit with their â€œPapa Lankyâ€ . Wilma passed away in May of 1995, leaving a hole in Lankâ€™s life. In 2005, Lank met Ann Meineke. They shared 7 wonderful years together until, due to health reasons, Lank moved to Yakima to live with his daughter, Edith. He often spoke fondly of his love and thankfulness for Ann. During his last year of life, he blessed his grandchildren, great-grandchildren and great-great grandchildren with many precious moments (and dirty jokes) that they will always treasure. But, the greatest gift of all is that before he died, he asked Jesus to be his Lord and Savior. The family would like to thank all of his dear friends, Lank said you will know who you are, for all of the marvelous times together. His family would also like to thank you all for taking such good care of him when they could not be there to do so. In the last weeks of his life, Lank shared his goodbyes and his words of wisdom. One of these parting bits was this, â€œIf itâ€™s not a hard life, itâ€™s not worth living.â€ Lank was preceded in death by his parents, and his beloved Wilma and Ann. He is survived by his son, William Wilhelm & Jeannie Morrow of Raymond, his daughter, Edith (Wilhelm) Williams & her husband Connie Williams of Yakima, and a former daughter-in-law, Sherry Wilhelm of Rochester. He is also survived by 5 grandchildren: Denna Wilhelm, Butch Wilhelm (Brenda), Shane Williams (Amanda), Pete Williams (Angel) and Elizabeth Boltz (Aaron); 14 great-grandchildren: Jason, Drew, John, Bryson, Alexis, Katy, Bailey, Michaela, Bowan, Nik, Josh, Mikaela, Deandre and Hector; and 6 great-great grandchildren: Wyatt, Willow, Jade, Autumn, Brooke and Layla. Happy Fishing Papa Lanky! Graveside services will be held at Fern Hill in Menlo at 1 PM, Monday, November 4, 2013. Bring your chainsaw for a â€œchainsaw saluteâ€ in honor of Lank. Attire requested by the family and Lank is a â€œLumberjack Specialâ€ .

The family of Charles Wilhelm created this Life Tributes page to make it easy to share your memories.

Send flowers to the Wilhelm family.