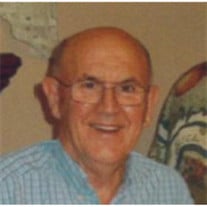 Carson Gene Boggs, a longtime Raymond resident, died Wednesday, March 16, 2016 at his home. He was born April 6, 1936 in Pound, Virginia to Alfred and Lester (Collins) Boggs. Carson enlisted in the United States Army in 1954. While serving he was trained as a crane operator and helped build several buildings. He was also trained as a Military Police Officer. After being honorably discharged in 1957 he was awarded the Good Conduct Medal. Carson went on to marry Shirley Hubbard on November 27, 1957 in Wise Virginia; together they moved to Washington in 1958. He worked for Weyerhaeuser for 35 years until his retirement in 1998. He was a member of the Crossroads Church in Raymond, the V.F.W. and a member of the IWA. Carson enjoyed hunting and fishing, carpentry and gardening, he always had a project. He and Shirley traveled around the country to all 50 states; including many trips to see family in Virginia. He loved his grandkids and great grandkids, most of all he loved to spend time with his wife, Shirley who survives him at the family home in Raymond. Carson is also survived by two sons Carson (Tena) Boggs of Raymond, Arlie (Sarah) Boggs of Raymond; a daughter Vanessa (Paul) Nichols of Raymond; sisters Mary Jane Sturgill of North Carolina and Violet (Melvin) Corbitt of South Bend; 7 grandchildren and 5 great grandchildren. He was preceded in death by a son Alfred Boggs; brothers Bertrend, Odell, Wilburn, Calvin, Charles, Elmo, Elbert and Don Maurice as well as two sisters Janice Wilson and Geneva Boggs. Our dad and husband helped too many people to count, he didnâ€™t do it for the pats on the back but out of genuine love and concerns for others. He leaves a lasting legacy of being the hands and feet of God in this world. Memorials in Carsonâ€™s memory may be made to Harbors Home Health & Hospice 201 7th St, Hoquiam, WA 98550 or Willapa Harbor Helping Hands P.O. Box 597, South Bend, WA 98586. Funeral services will be held at 11:00 a.m. Wednesday, March 23, 2016 at Crossroads Church in Raymond followed by burial at the Fern Hill Cemetery in Menlo. Arrangements are in care of Stollerâ€™s Mortuary in Raymond.

Carson Gene Boggs, a longtime Raymond resident, died Wednesday, March 16, 2016 at his home. He was born April 6, 1936 in Pound, Virginia to Alfred and Lester (Collins) Boggs. Carson enlisted in the United States Army in 1954. While serving... View Obituary & Service Information

The family of Carson Boggs created this Life Tributes page to make it easy to share your memories.

Send flowers to the Boggs family.