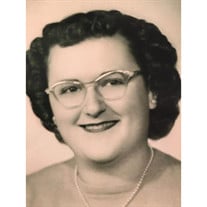 Caroline M. Rutherford, a longtime Lebam resident, passed away Sunday, March 27, 2016 at the Willapa Harbor Hospital in South Bend, while surrounded by her loving family. She was 83. Caroline was born on December 16, 1932 in Atkinson, Nebraska to Cecil Edward and Mathilda Marie (Beirmann) Green. She moved locally in 1947 and worked at Alta Vista Dairy for 10 years in South Bend. Caroline married the love of her life, Dale M. Rutherford on July 19, 1958 in South Bend. He survives her at the family home. She was a loyal member of the Holy Family Catholic Church in Frances, a member of the Altar Society, the Lewis-Pacific Swiss Society, the Farmers Club and Pinochle Club. Caroline loved spending time with her family and especially enjoyed her grandchildren and great-grandchildren. She enjoyed gardening and planting flowers. Her favorites were her dahlias, red geraniums and marigolds. She had such a beautiful display every year and received many compliments. She was also an excellent cook and was well known for her delicious baking. Wherever she went, she always had a wonderful dish to offer. She and Dale loved playing pinochle with friends and she enjoyed attending church every Sunday. She is survived by two daughters Nancy (Brett) Salme of Willapa, and Lisa (Kevin) Sliva of Raymond; a son Daniel Rutherford of Lebam; a brother Robert Green of Washougal, brother-in-law Clinton Rutherford of El Paso, Texas, three sisters Pat Heath of Raymond, Jeanette Green of Seattle and Sharon Monohon of Mississippi and a sister-in-law Shirley Morris of Bellevue. Caroline is also survived by eight grandchildren Kimberly (Britt) Swartz, Natalie (Floyd) Hurley, Crystal (Chris) Hampton, Lacey (Andrew) Johnson, Cassie (Tanner) Longwith, Aiden Sliva, Jacie Rutherford and Dale Rutherford; 9 great grandchildren Cami, Lany and Hank Swartz; Paislee, Haylen and Jaxen Hurley; Bella, Cash and Andi Johnson. She was preceded in death by three brothers Dennis, Marvin and Kenneth Green. Memorials in Carolineâ€™s memory may be made to the Holy Family Altar Society c/o Patti Gwerder 331 Elk Prairie Road, Raymond, WA 98577. Rosary services will be held at 9:30 a.m. Saturday, April 2, 2016 followed by 10:00 a.m. Funeral Mass at the Holy Family Catholic Church in Frances and burial services at the Fern Hill Cemetery in Menlo. A gathering will be held at the Swiss Hall in Frances. Arrangements are in care of Stollerâ€™s Mortuary in Raymond.

Caroline M. Rutherford, a longtime Lebam resident, passed away Sunday, March 27, 2016 at the Willapa Harbor Hospital in South Bend, while surrounded by her loving family. She was 83. Caroline was born on December 16, 1932 in Atkinson, Nebraska... View Obituary & Service Information

The family of Caroline Rutherford created this Life Tributes page to make it easy to share your memories.

Send flowers to the Rutherford family.