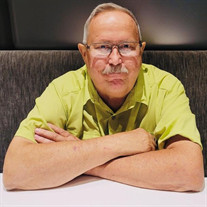 Cal Melvin Bogar "Bogie", died on Monday August 23rd, 2021, in the Virginia Mason Hospital surrounded by family. Cal was born in Raymond, Washington to Calvin and Geraldine (Olson)Bogar on July 14th, 1952. Cal was the beloved husband and best friend of his one and only love of 46 years Mary; they married on August 9, 1975. Cal started his career as a meat cutter at the age of 16 and retired in 2005, only to enjoy a cup ofcoffee prior to managing the dairy department at Pioneer Grocery until 2018. He especially loved providing quality cut meats for members of the community during the holiday seasons. Cal was involved in numerous clubs and associations. He was current Commander of the Sons of American Legion 150, Chaplain for Raymond Eagles Aerie 1631, member and former trustee of the Raymond Elks 1292. He was also a member of Lewis Pacific Swiss Society, Willapa Harbor Lions Club, and Holy Family Catholic Church. He was especially proud of his 38 years of volunteering for the Raymond Fire Department as an EMT/Fire Fighter. He enjoyed most sports but favored Little League Baseball the most. He was active in the local league since a small boy. He was a team member, coach, manager and umpire. His umpire team covered district and state games several times. He was especially thrilled to umpire games this past spring for all 3 grandsons. Cal is survived by his wife; Mary, his children; JJ (Kelsey), Blake, and Caleb, his grandchildren; Haydenne, Trapper, Harlen, Archer, and Clover; and his sister Christy (Mike) Moore. He was preceded in death by his sister; Cindy, parents, and grandparents. Funeral service will be held at St. Lawrence Catholic Church in Raymond on Saturday, September 4th at 11:00 am, interment at Fern Hill Cemetery, reception to follow Raymond Elks. Arrangements are being handled by Stollers Mortuary. Memorials in Cal's name can be made to The Raymond Tall Elks and Willapa Harbor Little League Baseball Association.

The family of Cal Melvin Bogar created this Life Tributes page to make it easy to share your memories.

Send flowers to the Bogar family.