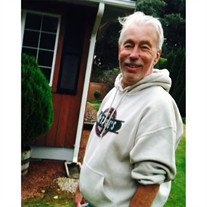 Brian Jerome McTighe, 73, of Grayland, passed away at home on December 6, 2016. Brian was born April 20, 1943 in Coeur dâ€™Alene, Idaho to Bertram J. McTighe and Elaine V. Young. He spent part of his childhood in Coeur dâ€™Alene and part in Spokane, Washington. He graduated from West Valley High School in Millwood, Washington in 1961. After high school, Brian enlisted in the Marines, a decision which would shape the course of his life. He served 5 years in total and earned a Good Conduct Medal as well as a National Defense Service Medal for sharpshooting. His service took him to Japan where he specialized as an engineer equipment mechanic. He was honorably discharged in 1966, but always considered himself a Marine. Shortly before he left the military, Brian and his first wife, Linea, welcomed a son. Over the next few years, life took Brian to Seattle, Washington, where he settled down, working for Boeing as an interior installer and welcoming two daughters with his second wife, Karen. After honing his considerable mechanical skills working for Volkswagen, he founded Auto-Site Automotive in 1978. He successfully ran this business for 10 years before selling it and returning to Boeing, where he worked until 1999. In 1984, Brian bought a tiny cabin near the beach in Grayland, Washington. This cabin became his passion. For many years, he spent every available weekend there. Once he left Boeing, he moved there permanently. He turned the tiny cabin into a comfortable home of which he was very proud. The same talent and creativity he applied to his work as a mechanic could be seen in the work he put into his home at the beach. He loved nothing more than inviting his friends, his sister, and his children and their friends to spend time with him there. He would set up croquet courses that spanned the entire yard, blast classic rock music, barbecue steaks on the grill, and build enormous fires in his fire pit. Many of his lifeâ€™s favorite memories happened at his beach home. Brian was preceded in death by his parents and infant brother Michael B. McTighe. He is survived by son Frank McTighe (Lisa), daughters Brenda McTighe (Knute Knutson) and Cyndi McTighe Flaig (Jason), sister Arlysa (aka Arlene) Hartz Miller (Ray), nieces Martha Buckley and Elaine Burke Hall, nephew Gary Burke, and grandchildren Ciera, Tyler, and Madison McTighe. A memorial celebrating Brian will be held Saturday, January 7, 2017 at 1:00 p.m. at the South Beach VFW post #3057, 211 E Pacific Ave., Westport, WA. Anyone who would like to come and help us remember Brian is welcome. If you would like to stay afterward, we will have a potluck at the same location. Please bring a dish to share. Drinks can be purchased at the VFW bar. In lieu of flowers, the family would appreciate donations to help with mortuary and memorial arrangements. Please copy and paste the following into the address bar on your Internet explorer to donate in memory of Brian: paypal.me/BMcTighe Arrangements are in care of Stollerâ€™s Mortuary in Raymond.

Brian Jerome McTighe, 73, of Grayland, passed away at home on December 6, 2016. Brian was born April 20, 1943 in Coeur dâ€™Alene, Idaho to Bertram J. McTighe and Elaine V. Young. He spent part of his childhood in Coeur dâ€™Alene and part in... View Obituary & Service Information

The family of Brian McTighe created this Life Tributes page to make it easy to share your memories.

Brian Jerome McTighe, 73, of Grayland, passed away at home on...

Send flowers to the McTighe family.