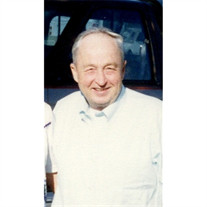 Billie Eugene Bryant, 85, of Foster passed away Wednesday. He was born in Seymour, Missouri to James Alvin and Rena (Cardwell) Bryant. They moved to Sultan, Washington where he graduated from Sultan High School and later moved to Lebam, Washington. He served in the United States Army from February 1952 until February 1954 and was stationed in Germany. Billie met his wife, Louise, in November 1954 and they married in March of 1955. They had three children; James, Janice who died at birth, and Diana. The family moved to Oregon in 1956. He worked for Georgia Pacific Paper Mill in Toledo for 33 years. He was a life member of the Newport Masonic Lodge #85, Knights Templar of Oregon, Cryptic Masons of Oregon Royal Arch Masons of Oregon, Benevolent and Protective Order of Elks No,. 2105 and a member of the Order of Eastern Star, Yaquina Bay Chapter #142. Billie enjoyed hunting, fishing and gardening with his grandchildren. In the winters after retiring, he and his wife traveled to Indio, California where they enjoyed playing shuffleboard in the District 5 League as well as other activities in the park until he became ill with dementia and was in a private adult assisted care home from May of 2014. Owners were neighbors for many years, Loren and Alma Hilton and his caregiver was Gretchen Sanders who sat with him in our home a few times and her three year old daughter thought â€œPapaâ€ was hers to take care of, he had excellent care. Billie is survived by his wife Carolyn; children: James and his wife Juanita Bryant, Diana and her husband Rich Edwards; mother age 102 Rena Bryant; brothers: Jimmy, Doyle, Jerry, Lyle, Tom, David; sisters: Wilma, Joyce; four grandchildren: Adam Marsh, Isaiah Ward, Joseph and Matthew Edwards; three great grandchildren: Lincoln and Claire Marsh, Sophia Ward. He was preceded in death by his father James Bryant; brother Danny; and his baby daughter Janice. Viewing will be 4 - 7 pm Wednesday October 5th at Sweet Home Funeral Chapel in Sweet Home, Oregon. Funeral service will be 1:00 pm Friday October 7th at Stollerâ€™s Mortuary in Raymond Washington. Burial with Military Honors will follow at Fern Hill Cemetery in Menlo, Washington.

Billie Eugene Bryant, 85, of Foster passed away Wednesday. He was born in Seymour, Missouri to James Alvin and Rena (Cardwell) Bryant. They moved to Sultan, Washington where he graduated from Sultan High School and later moved to Lebam, Washington.... View Obituary & Service Information

The family of Billie Bryant created this Life Tributes page to make it easy to share your memories.

Billie Eugene Bryant, 85, of Foster passed away Wednesday. He...

Send flowers to the Bryant family.