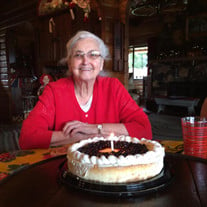 Betty Jean Brown was born March 18th, 1926 in Hoquiam, WA and was the second child born to Arthur and Mabel Doolittle. She finished the journey of life at Willapa Care Home in Raymond, WA. at the age of 94. She was raised in a small community called Grass Creek about 6 miles from Hoquiam and was joined later with three younger siblings, Wayne, Shirley and Charlotte. Her older sister, Juanita was "Big" sister to her and remembered her birth. Many interesting stories were told to her and her siblings about life in Grass Creek during the depression years. Stories of clam digging, oyster hunting, crabs cooked by her Dad in a tub outside--many trips down the railroad track to the "Cliffs" and "James Rock," picking trilliums, blackberries, and fishing, learning to swim in the pasture creek, and in the river with a big bon fire on the bank to warm up with! However, the most significant part of her life came in 1932 when two men came to Grass Creek to preach the Gospel and her Mom attended those meetings. Her mother, and Juanita believed the Gospel they listened to and chose to follow. Betty at age 11 chose to do the same. Betty graduated from Hoquiam High school and later moved to Aberdeen and was employed as a secretary at the community hospital. Dec. 7th was very vivid to her as WWII began on Dec. 7th, 1941. Soldiers from Ft. Lewis came and went and then a soldier from Missouri arrived there that changed her life. He was Clifford Brown, and on Sept. 20th, 1947 they married and spent a few years in Everett, WA where their first child, Jan was born. Later they moved back to Kansas and Linda came. An infant son, David Glen was born to them but lived only a few days. He was never forgotten by her and soon after that both of them decided to come back to the northwest and they settled in the Chehalis area. Another son came and his name was David also. Then a little girl came called Sheryl and later, two more sons, Ken and Dan. Cliff and Betty had 50 years together before Cliff died in January of 1998. They enjoyed many things together--among them the beach, deep sea fishing and the advent of their many grandchildren. Perhaps one of their greatest enjoyments being the yearly church convention they attended at the Littlejohn farm in Olympia. They also appreciated the weekly little Sunday morning meeting. that met in their home for many years. After Cliff’s death she spent a few years in a retirement home in Chehalis. Then, she moved to the home of her oldest daughter and husband, Ned and Jan Newman. She had a wonderful several months there in a log cabin on their place, and her greatest concern, as expressed to her little sister, Shirley was that she would gain too much weight because of such good cooking! She loved her cabin and the beauty of nature, her flowers, etc. She was preceded in death by her parents, her siblings, Charlotte and Juanita, her husband, and infant son. She is survived by her children Jan (Ned) Newman, Linda (Dale) LiaBraaten, David (Star) Brown, Sheryl Brown (Rich Howarth), Ken Brown and Dan (Cheryl) Brown, nephews, nieces, many grandchildren and great grandchildren. A private graveside service will be held at Claquato Cemetery in Chehalis, Washington.

Betty Jean Brown was born March 18th, 1926 in Hoquiam, WA and was the second child born to Arthur and Mabel Doolittle. She finished the journey of life at Willapa Care Home in Raymond, WA. at the age of 94. She was raised in a small community... View Obituary & Service Information

The family of Betty Jean Brown created this Life Tributes page to make it easy to share your memories.

Send flowers to the Brown family.