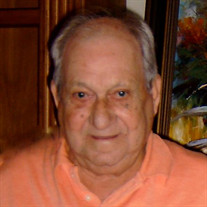 Bernard Paul LeClair (Lee), age 94, of Raymond, Washington, passed away Saturday night, December 1, 2018 at the home of his son and daughter-in law surrounded by his family. Born October 4, 1924 in Port Colden, New Jersey, Lee was he youngest of seven children born to the late Joseph Edmund and Emma (Charoux) LeClair. Lee was a US Navy veteran who served our country during World War II. He was a Motor Machinist Mate, First Class from 1941 to 1947. During his time of service he also volunteered and participated in the Joint Task Atomic Bomb test Operation Crossroads at Bikini Atoll, Marshall Islands. He was a member of the VFW and the American legion Post No. 150. His favorite activities were bowling, fishing, hunting and golf. Lee leaves behind three children, Lois Pebbles McHugh of Eden, NC, Brenda Timms of Macon, GA, and Terrance LeClair (Charmayne) of, Raymond, WA, 8 grandchildren and 19 great grandchildren. To his grandchildren, Sandra Pebbles Tuggle, Dustin Pebbles, Christa Timms Newton, Chad Timms, Jerad LeClair, Travis Settlemyre (LeClair), Melissa LeClair Gonzales, and Paul LeClair he was lovingly known as PopPop, the grandfather that shared his love of sports and stories of life with each of them whenever he could. Memorial services for Lee will be announced at a later date. Arrangements are in care of Stoller’s Mortuary in Raymond, WA.

The family of Bernard Paul LeClair created this Life Tributes page to make it easy to share your memories.

Send flowers to the LeClair family.