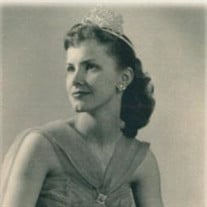 Barbara Ann Petit of Mesa, AZ passed away December 12, 2018 at the age of 79. She was born in Yakima, Washington on November 12, 1939 to John and Wilma [Sargeant] Gerwig and lived there for her first 19 years of life. After graduating from Yakima's West Valley High School, she enrolled in Yakima Valley Community College (YVC) for two years and then transferred to Central Washington State University (CWU). Her major was secondary education with the focus on language arts and speech. While at YVC, she was selected by the junior Chamber of Commerce as a contestant and won the title of Miss Greater Yakima. KIMA-TV, channel 29, of Yakima hired her as their weather reporter where she served while a student at YVC and they sponsored her as a contestant in the Miss Washington contest which was sponsored by the Seattle Junior Chamber of Commerce. There were 17 contestants in the competition for the right to represent Washington State in the Miss America contest in September 1959 in Atlantic City, New Jersey. This was an exciting highlight of her life in that time and she was fortunate to be selected in the final five as third runner-up. During the summer break prior to the Miss Washington contest, she was offered a summer job as a fire lookout and manned a station high on a ridge overlooking the Kittitas Valley of Eastern Washington. The many photos she had of her experience at the remote two-story tower reminded her of how adventurous she was in those days. Following those wonderful experiences, she enrolled at CWU where she continued her studies to become a high school teacher. The University Homecoming celebration selected a Homecoming Queen each year from candidates sponsored by dormitories and she was selected, which was a very enjoyable beginning to her career at CWU. It was during this time, that she met her future husband, Doug, who was also studying to be a high school teacher. The next year was also memorable when she was selected as Miss Central Washington University. After graduating from CWU, she and Doug were married. They were fortunate to secure teaching positions in Yakima Valley at Naches High and East Valley High. Their only child, Don, was raised in the Valley. Doug left the profession of teaching after 6 years and worked for Abbott Laboratories for the next 30 years. Job promotions required relocations to Oregon, Utah, and Illinois leaving them with fond memories of each state. Upon retirement, they purchased a home in Washington State, their "vacation" home and another in Mesa. Two of their grandchildren live in Idaho, as does their son and daughter-in-law. Their granddaughter graduated Portland State University. Barbara is survived by her beloved husband of 57 years, whom she was married to in September of 1961, Douglas P. Petit; her son and daughter-in-law, Donald and Karen Petit; grandchildren, Justin, Mitchell and Hailey Petit; great grandchildren, Teagan and McKinley Petit, as well as many friends. A Celebration of Life will be held at 11:00 a.m., Saturday, February 23, 2019 at Stoller’s Mortuary in Raymond with a luncheon following at The Barge Restaurant in Raymond. Inurnment services were held prior at Mariposa Gardens Cemetery Chapel in Mesa, Arizona.

Barbara Ann Petit of Mesa, AZ passed away December 12, 2018 at the age of 79. She was born in Yakima, Washington on November 12, 1939 to John and Wilma [Sargeant] Gerwig and lived there for her first 19 years of life. After graduating from... View Obituary & Service Information

The family of Barbara Ann Petit created this Life Tributes page to make it easy to share your memories.

Send flowers to the Petit family.