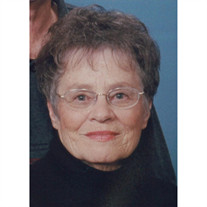 Barbara Ellen Bacon was born July 2, 1931 in Raymond, WA to Shirley F. Rinehart and Ollie (Davies) Rinehart. She was a lifelong Raymond and South Bend resident. She passed away Dec. 25, 2014 at the Willapa Harbor Health and Rehab Center after a long battle with Alzheimerâ€™s disease. She married Vernon Dixon and they had four children. Later in life she married William (Bill) Bacon. Barbara was a homemaker for most of her life but worked at Hadlaâ€™s and J.C. Penney for several years. Barbara loved to be with her children and grandchildren. She was very talented at cooking, baking, stained glass work, macramÃ©, and painting with both oil and watercolors. She especially loved painting her windows for Christmas, her favorite holiday. She had a green thumb and an exquisite way with flowers and plants with her husband Bill she shared a lifelong love of nature and the great outdoors. They loved to go on rides looking for birds, elk and deer. They took pictures of everyone and everything in their lives. She loved animals, especially her cat Bebe. They looked after each other the last seven years. Throughout her life she was an active individual who enjoyed bowling, tennis, swimming and golf. At the age of 40 she took up skiing and she like to watch the Mariners. She is survived by three of her children, daughters Vickie L. Hadley (Glen) of Salem, OR, Dianna J. Henson (Harris) San Rafael, CA and Debbie J. Cox (Dave) of South Bend, WA. She has eight grandchildren who also survive her, Shad Pollari (Bobbi), Dr. Amity Wrolstad (Eric), Dr. Craig Cox (Shalyn), Keith Cox (Rachel), Dr Matt Cox (Kinnarone), Taylor Cox, Kimberly Cox, and Shawna Dixon. She has seven great grandchildren, Cameron and Ashley Pollari, Saffin and Kieron Wrolstad, Kieran and Leo Cox and Aubrey Cox. Barbara also had several nieces and nephews. She was preceded in death by her mother and father, her husband William (Bill) Bacon, a son Benjamin V. Dixon, brothers Clifford Rinehart and his wife Margaret and Jim Rinehart and his wife Irma. Barbara was a very loving and compassionate person who will be truly missed. We would like to thank the Alder House, friends and family, and the Willapa Harbor Health and Rehab staff for taking such good care of our mom. In lieu of flowers memorials may be made to the Willapa Harbor Helping Hands, P.O. Box 105, Lebam, WA 98554, or to H.A.V.A., P.O. Box 243, Raymond, WA 98577 at Barbaraâ€™s request no memorial services will be held. Arrangements were in care of Stollerâ€™s Mortuary in Raymond.

Barbara Ellen Bacon was born July 2, 1931 in Raymond, WA to Shirley F. Rinehart and Ollie (Davies) Rinehart. She was a lifelong Raymond and South Bend resident. She passed away Dec. 25, 2014 at the Willapa Harbor Health and Rehab Center after... View Obituary & Service Information

The family of Barbara Bacon created this Life Tributes page to make it easy to share your memories.

Send flowers to the Bacon family.