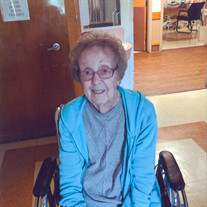 Audrey Laverne Corcoran died Saturday, January 25th, 2020 at the Willapa Harbor Care Center in Raymond; she was 85. She was born February 7, 1934 to Jentoff and Esther (Madsen) Hendricksen in Circle, Montana. After attending South Bend school, Audrey married John G. Swartz, they later divorced.  She married Don Corcoran on September 12, 1980, they remained married until her passing. Some of her work history included the oyster industry, the H&H Cafe, Capital Savings and Loan and Century 21. She was a member of the Lutheran Church and the Ladies of the Elks. Audrey enjoyed reading, crocheting, crossword puzzles and she especially enjoyed spending time with her children and grandchildren. Surviving Audrey are her husband Don at the family home in South Bend, her sons John (Dee) Swartz of Menlo, Stuart (Margi) Corcoran of Ocean City, Dean (Lisa) Corcoran of Bothell, daughters Teri (Dean) Russell of Ilwaco, Andi (Jim) Edwards of South Bend, 11 grandchildren, 17 great grandchildren, and 2 great great grandchildren. In lieu of flowers, donations may be made to the HAVA Association in Raymond at P.O. Box 243. Raymond, WA 98577. At Audrey’s request, no services will be held.

The family of Audrey Corcoran created this Life Tributes page to make it easy to share your memories.

Send flowers to the Corcoran family.