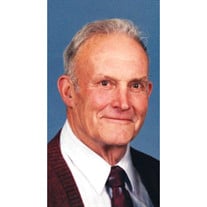 Arthur M. Jergensen a longtime Raymond resident died Monday, January 6, 2014 at the Willapa Harbor Hospital in South Bend; he was 95. He was born December 9, 1918 in Ravenna, Nebraska to Emma Jergensen three days after his father Arthur passed away from the pandemic flu. Art and his older brother, Bernard, learned to work as men at an early age on the family farm. He left home when he was 18 to find work and live with his Aunt Louise (Ackerman) in a town called Raymond, Washington. His first job was at the Ford Dealership. Art served two years in the United States Army during World War II. He returned and began working for Weyerhaeuser; retiring after 40 years as a heavy equipment mechanic. Art met a local girl from the Frances area, Stella Karnas; they were married November 15, 1941. Art and Stella just celebrated their 70th wedding anniversary in 2011. She preceded him in death in March of 2012. Art is survived by two children Gary Jergensen of Vancouver, WA and Nancy Bailey of Snohomish, WA; five grandsons, Eric, Kevin and Stuart Jergensen; Kyle and Scott Bailey. He enjoyed playing cards, hunting, clamming, gardening and woodworking. The family extends a special thanks to the Willapa Harbor Hospital, Catholic Community Services, and St. Lawrence Parish for the love and care of their dad. Funeral mass will be held at 11:00 a.m. Friday, January 10, 2014 at the St. Lawrence Catholic Church, luncheon will immediately follow. Interment will be held next to his wife Stella, at the Fern Hill Cemetery in Menlo. In lieu of flowers donations may be made to the St. Lawrence Catholic Church 1112 Blake Street, Raymond, WA 98577.

The family of Arthur Jergensen created this Life Tributes page to make it easy to share your memories.

Send flowers to the Jergensen family.