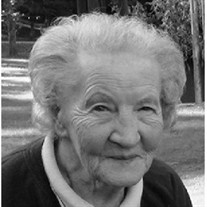 Alice May Anderson was born on Jan. 22, 1931, in Centrailia Washington, to parents Frank and Ada Anderson, third child of eight children. Alice grew up on Michigan Hill, in Rochester, Washington, on her family’s farm. As a young woman she worked at the glove factory in Centralia. She met Everett Goodwin during that time. They married May 1, 1948. They lived in Centralia, where they started their family, moving to PeEll, and eventually made Raymond their home out at Butte Creek in the early 1960's. They raised four children: Carol (Chet) Newby, Ella (Doug) Falkner, Lesley (Lynne) Goodwin, and Jed (Hayley) Goodwin, all of which survive her. She was preceeded in death by her parents, her husband of 48 years, Everett, grandson Michael Newby, great granddaughter, Nicole Sams and brother Donald Anderson. She is survived by her brothers: Robert Anderson, Patrick Anderson and Dan Anderson; sisters: Violet Newby, Jane Whiteman and Callela Johnson; her grandchildren: Howie (Kris) Newby, Shelly (Brian) Avery, Tammy (Tony) Sexton, Holly Sams and Douglas Falkner; great grandchildren: Shane, Brandon and Erin Sams, Justin Beebe, Elizabeth and Marissa Newby, plus many cousins, nieces and nephews. Alice worked many years in the outdoors, gathering greens and selling them to local buyers for the floral industry. In 1981, and into the 1990's, she worked at Flowers by Lynne using her knowledge of flowers and greenery to create many beautiful floral arrangements. Upon retiring, Alice continued taking care of her flowers in her yard. She loved the outdoors and was always seen in her later years mowing, raking and tending her property. Alice's family knew she loved angels and owls. She had quite a collection of both, mostly gifts from her family. She was a very talented crocheter, making many afghans and doilies for family. Alice once crocheted a full size bed spread with a large deer on it, she was very proud of that. She was a very talented person when it came to any craft she tried, whether working with yarn, material for sewing or planting flowers in her yard. Alice and Everett always had a full house at every major holiday. She was a great cook and made the best pies and gravy ever! Family was very important and we all loved gathering around the dinner table, as everyone was always welcome. Alice was a wonderful sister, mom, grandma and great-grandma. She will be dearly missed. We all loved her very much. A family gathering will take place at a later date. Memorials may be made to a charity of your choice.

Alice May Anderson was born on Jan. 22, 1931, in Centrailia Washington, to parents Frank and Ada Anderson, third child of eight children. Alice grew up on Michigan Hill, in Rochester, Washington, on her family&#8217;s farm. As a young woman... View Obituary & Service Information

The family of Alice May Goodwin created this Life Tributes page to make it easy to share your memories.

Send flowers to the Goodwin family.